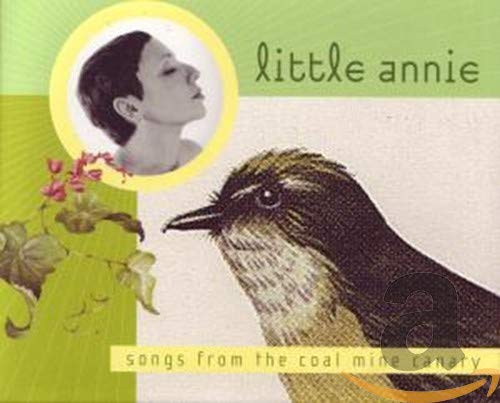 The most constant subject in Little Annie's (aka Annie Anxiety and Annie Bandez) work, whether she is painting, writing prose, or recording her songs, is love. Songs from the Coalmine Canary is her seventh full-length album. And, as has been her won't, it sounds completely different from any of her other offerings. Produced by Joseph Budenholzer (who also co-wrote a number of tracks and is the session's guitarist) and Antony - of Antony and the Johnsons - who also played piano and co-wrote a number of cuts here with Annie, and released on Durtro Jnana, Songs is, on many levels, her most searing yet most celebratory album yet. "Freddy and Me," kicks it off with the names of philosophers, psychoanalysts, sex, cultural symbols, medical conditions, drugs, religions, spiritual icons, bodily fluids, and philosophies, all accompanied by an acoustic guitar and shimmering cymbals. When the band pops in full of a cabaret orchestra's take on pop and Annie starts to sing, the need for solace and solitude in the midst of desperation is what rolls out of her mouth. But the real shock is in the refrain: "Won't you get down on your knees/and wash my weary feet made out of clay...." which she turns upside down and points at herself in the final chorus. There it is, effortless, sweet, gently swinging, and devastating. "Derma," with it's beautiful organ and piano interplay and simple chord changes, is one of those songs whose first lines you never forget: "Time may heal and birds may sing/Words may kill and truth may sting/And love may conquer many things/but derma covers all..." It's jaunty and catchy, but here again, the drama in her words and her straightforward delivery turns the listener into a receptacle of a truth that may be subjective, but resonates nonetheless as a poetry in motion, ever changing, ever uncovering, ever entreating into the heavens, but rooted to itself as human after all. "Lullaby," (dedicated to the deceased John Balance of Coil and other friends) is a beautiful paean to mercy and rest. But it goes on. "The Good Ship Nasty Queen," is a cabaret song answer to Brecht and Weill's "Pirate Jenny," straight-up. If the author Kathy Acker were still with US (late author of the infamously wonderful Pussy, King of the Pirates) she'd make it her theme song. "Absynthtee-ism" is both (black) humor/cultural observation and a deeply personal and moving manifesto, inside a tune that reflects gypsy swing, theater music, and of course, the smoky Berlin cabarets of the '30s. Annie is the quintessential feminist thinker her in songs. It's a feminism not only based in theory or cultural reflection, but in spirituality, humor, and in the experiences of love and relationships - to people, places, things, memory, joy, regret, and living dangerously in order to take it all in - both as a human being and as a woman simultaneously. Check out "If I Were a Man," and even more importantly "Strange Love." These two songs, like so many here, are rooted in the music of public performance as theater, but also as illusion, as rite, as ceremony. They are so earthy in texture, and Annie's voice is so utterly controlled in it's small range that it's ability to express is immediate and profound. The scat jazz of "End Is Near," is a swinging finger-popper. It feels like Mezz Meszzrow's hophead jazz band fronted by Judy Garland singing about the end of it all - with riotous joy and abandon. J.T.'s trumpet solos burn, as does Antony's piano comping and vamping, the in-the-pocket bassing of Paul Geluso, and the smoking drumming of Todd Cohen who not only keeps the beat but anchors all the swirling, off-the-rail music while playing in double time. It's all over far too quickly, this offering of savage tenderness, ferocious vulnerability, and radical independence that is nonetheless rooted in the community of the exposed, the mad, the hidden and the afraid: humanity. The rough-hewn poetry, bawdy wisdom, ravaged elegance, an.

Mushroom May Help Cut Down the Odds of Developing Depression

How to Battle Boredom during COVID

Flu and Heart Disease: Here's Why You Should Get Your Flu Shot

Do Genes Play a Role in How You Respond to Exercise?

Aspirin may be Harmful When Used for Preventing 1st Heart Attack, Stroke

Coping With COVID-19 Stress Easier With a Dose of Humor, Says Study

How to Manage Quarantine Weight Gain?

How Phytonutrients Work in the Body

A measure of body fat in adults

Height and Weight for Children

Are you pregnant? Use Medindia�s simple and useful calculator to find out whether you are pregnant or not.

The BMI calculator helps you assess your weight indicating if it is normal or if you are underweight or overweight, based on your height.

To Take Care of Your Diabetes

Which Medical Specialist (Doctor) should I Consult for my Condition?

Are you worried about side effects of the COVID-19 Vaccine?

OK, I agreeNo, give me more info